Will and I traveled to Concepcion, Chile this weekend to be mentors at "Hackathon del Fin del Mundo" (Hackathon of the End of the World, a reference to Chile's position as one of the southernmost countries in the world). The event was held at the University of Concepcion, one of the largest universities in Chile. UdeC as it is called is somewhat unique in that it is entirely located on an American-style campus. Most Chilean universities are spread out over several campuses or simply occupy ordinary buildings within a city like many urban schools in the US.

The hackathon was a lot of fun. It attracted some very talented designers, developers, and "hustlers" (as the business types are called) from the southern regions of Chile. I believe there were around 150-200 participants, which is quite impressive, especially since the south of Chile is rather sparsely populated. Projects ranged from NFC-enabled restaurant menus to drones for surveying wildfires.

I am probably not a great "mentor" because I'm not very good at starting conversations with strangers. This weekend was particularly tricky since many of the participants spoke only basic English and my Spanish is pretty minimal still. However, I got to talk with several teams about their projects. I worked quite a bit with one team in particular. They were working on an app to identify birds by their songs. They had already done their research (literally, their approach was based on a peer-reviewed journal article) and had a talented programmer with plenty of experience in machine learning. We discussed their methods and I gave some pointers on how they might present their prototype to the judges to get a better response. I also got to show off my "mastery" of Vim (although I'm an Emacs user now). They ended up getting second-place overall, so it was a very happy outcome!

Concepcion is a nice city. It is definitely very urban, though it is only about one million people, but it is further south so the weather is better than in Santiago and the air is much, much cleaner. I've included some pictures below. 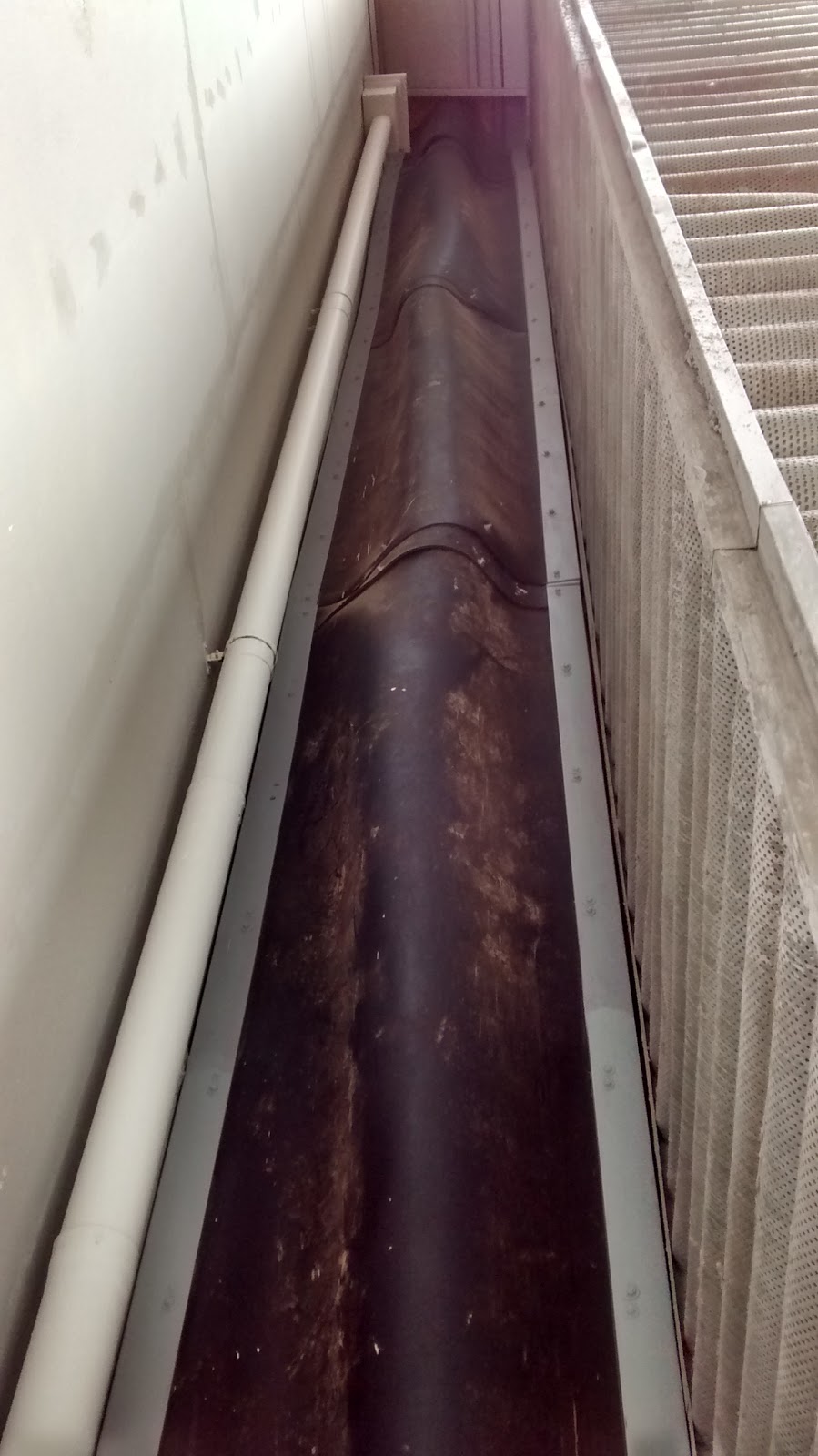 The photo above is interesting. Concepcion suffers from quite a few destructive earthquakes. The most recent major quake, in 2010, killed several hundred people and triggered a fire that burned down part of the Chemistry building at UdeC (which is where the event was held). This is one of the points where the newly re-constructed part of the building meets the older part. Instead of being rigidly attached, the buildings are connected by flexible rubber joints so that the two parts of the building can move independently in the event of a quake. 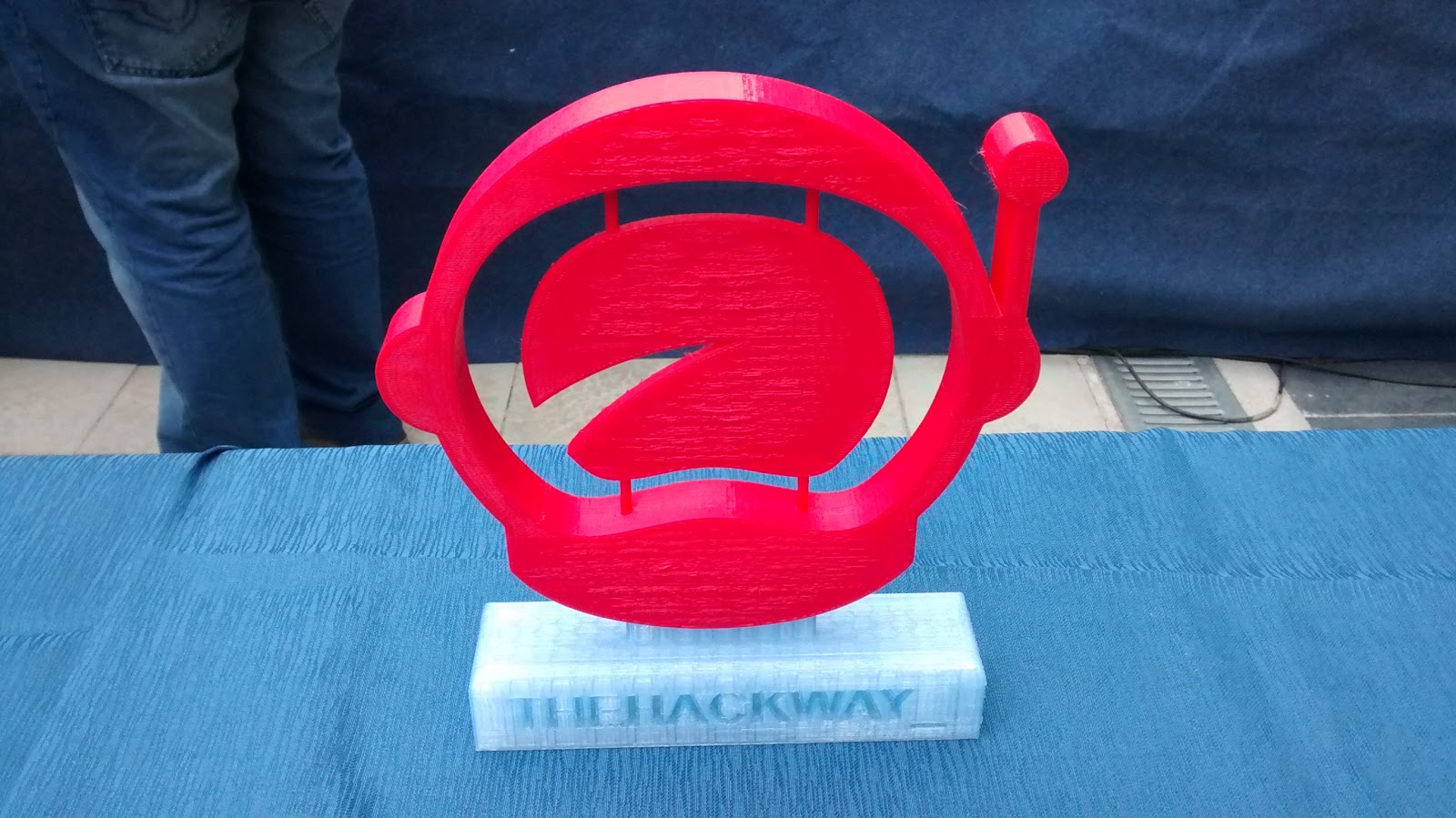 This was the second-place trophy, it was 3D printed during the day on Saturday by one of the sponsors of the event. 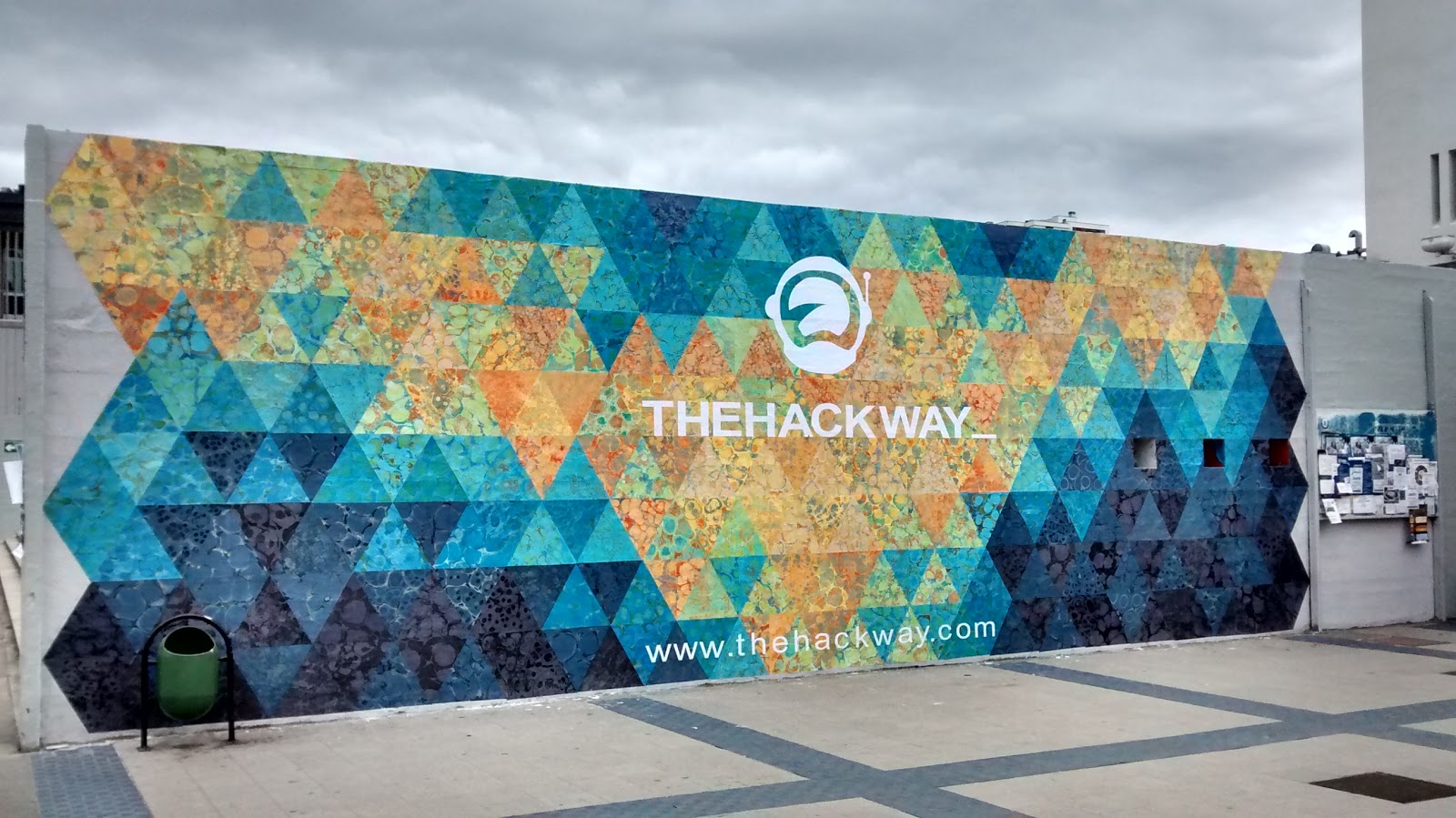 Chile is famous for its murals. The event organizers commissioned a temporary mural on campus to promote the hackathon, it turned out really nicely! 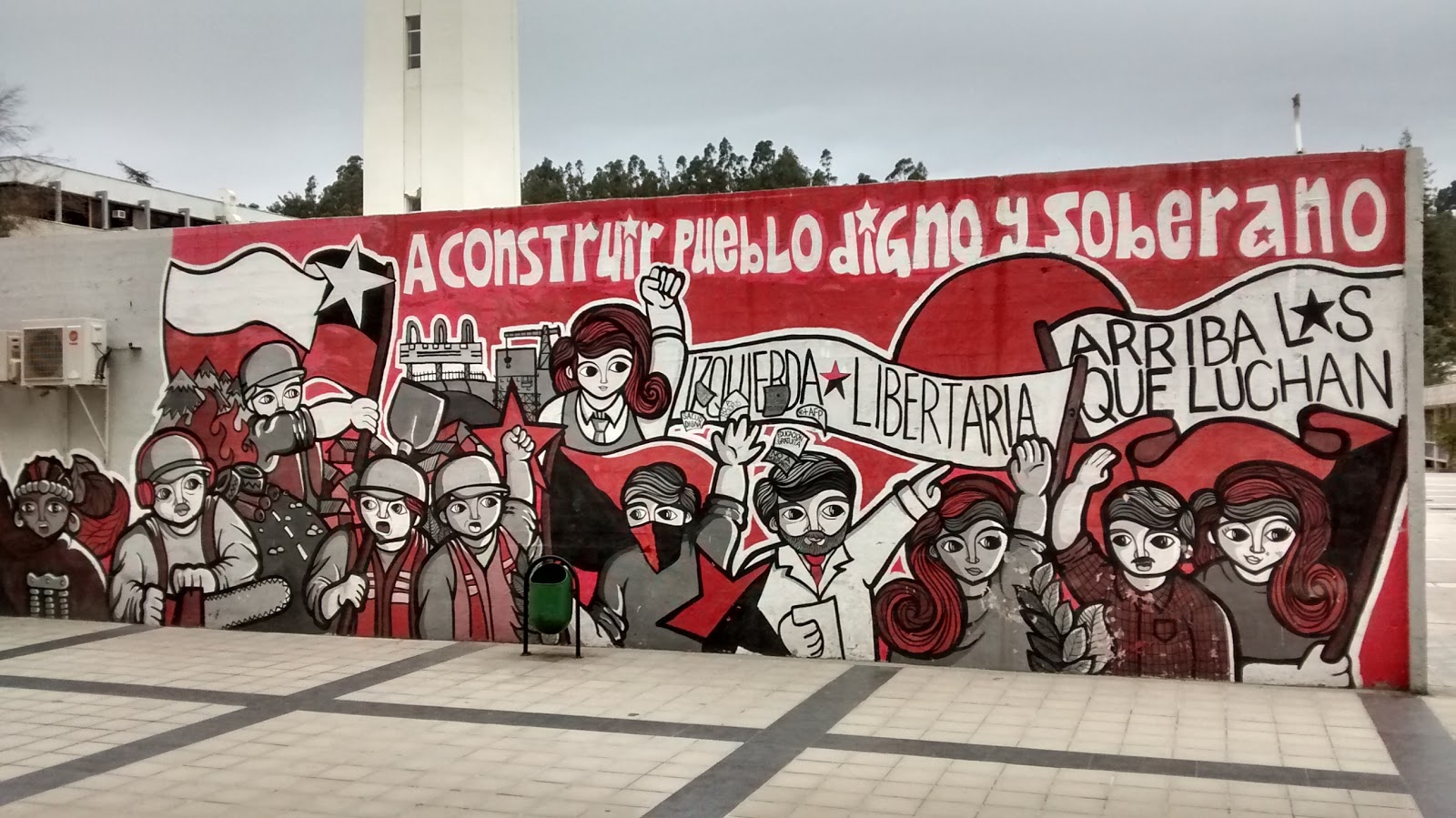 A leftist political mural. Concepcion appears to be a bit of a hotbed for leftist political activism in Chile, there were quite a few posters, murals, and "tags" offering similar sentiments. Note that Monsanto (the agriculture company) gets a mention. I approve. 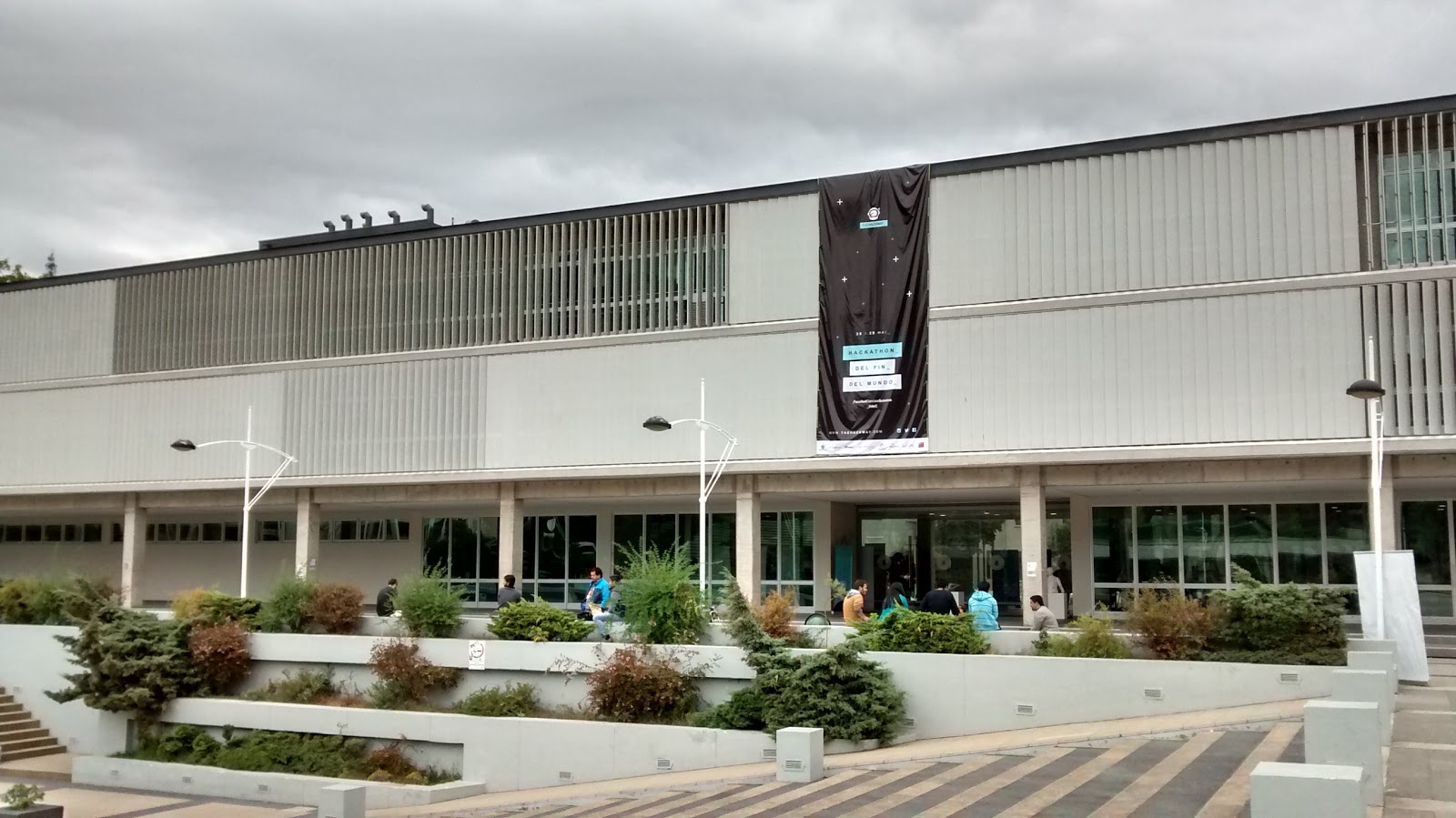 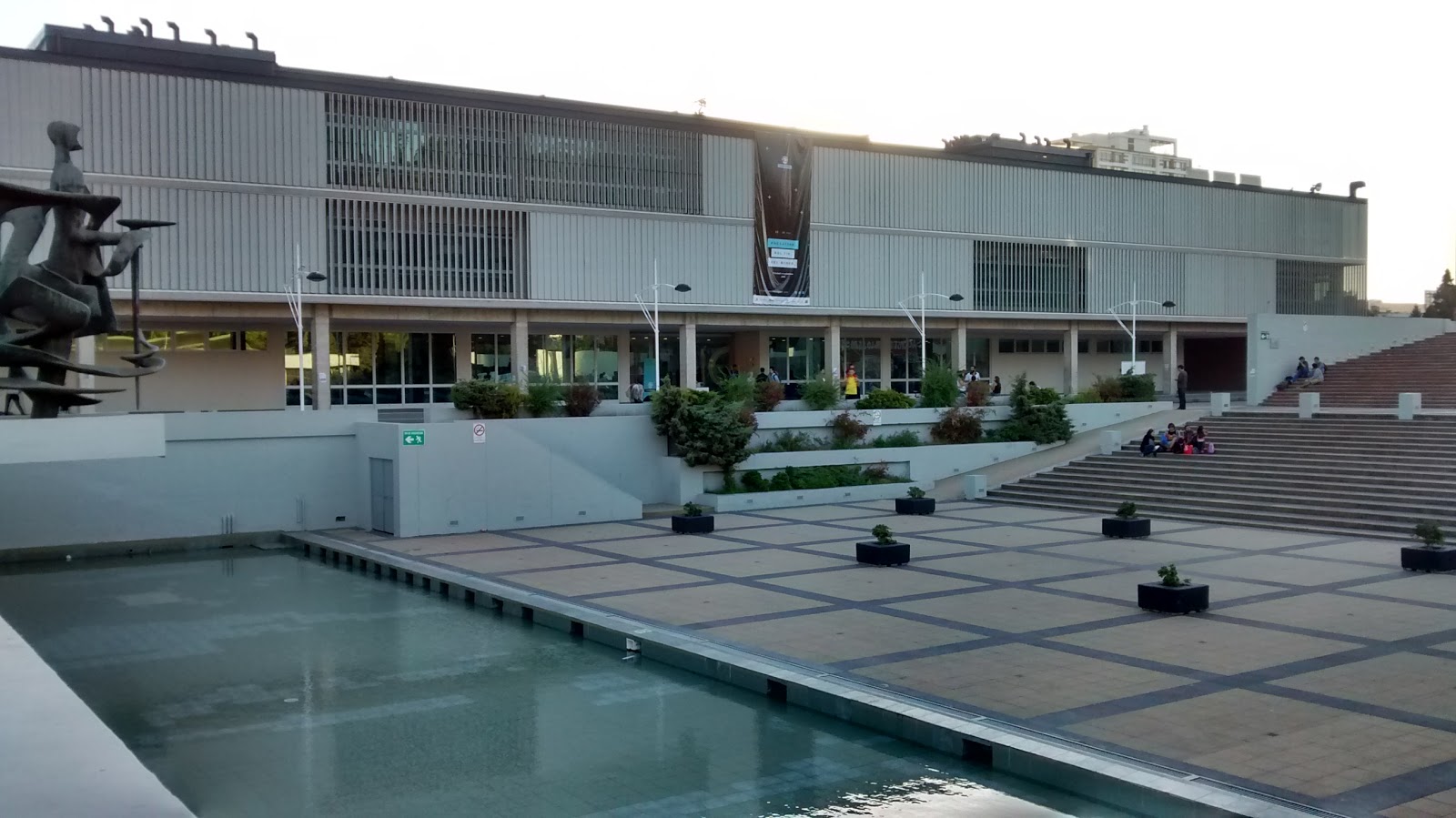 Two shots of the chemistry building at UdeC, where the hackathon was held. 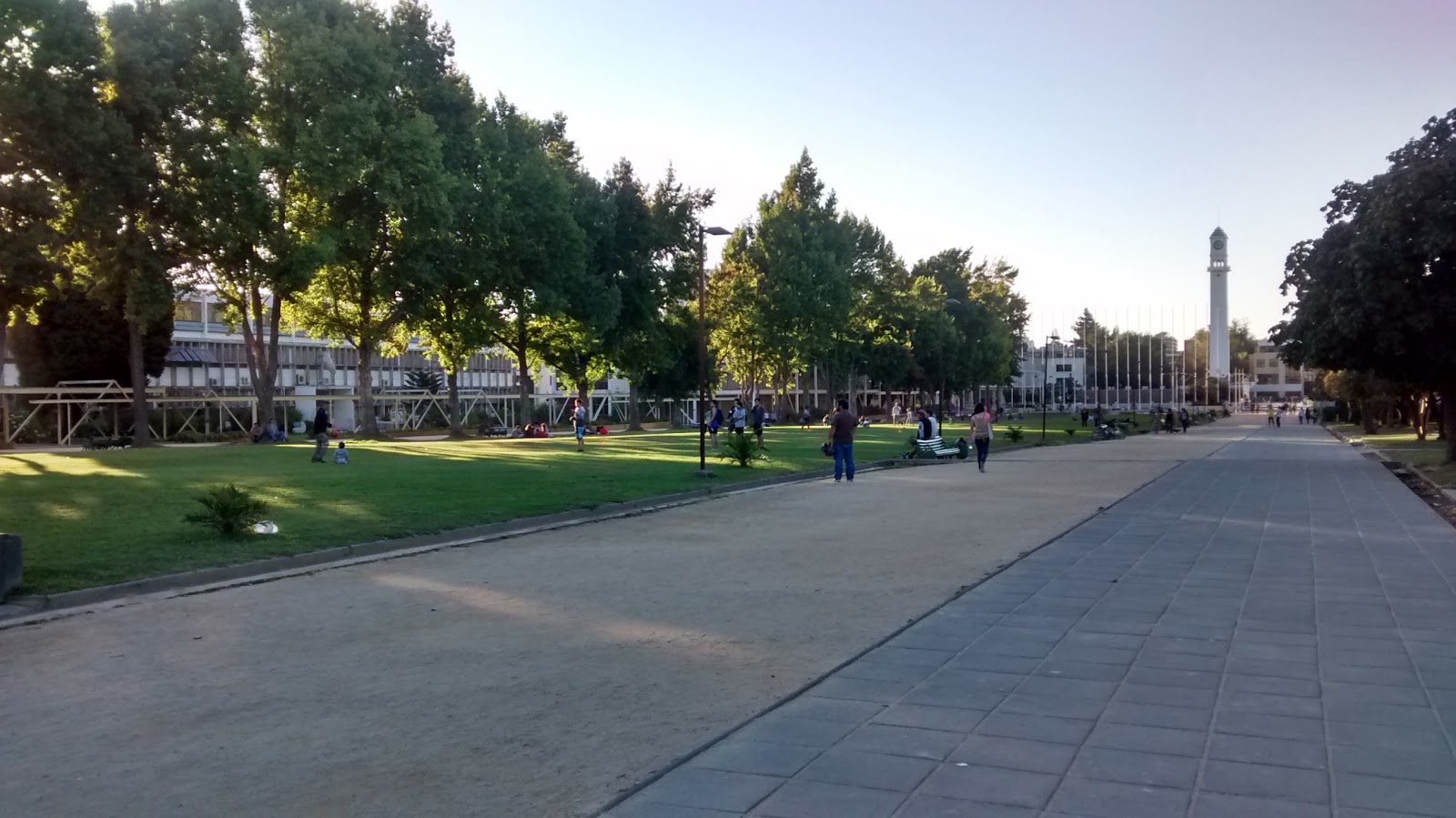 A nice shot of the main quad at UdeC. There was a lot of soccer going on, as one might expect! 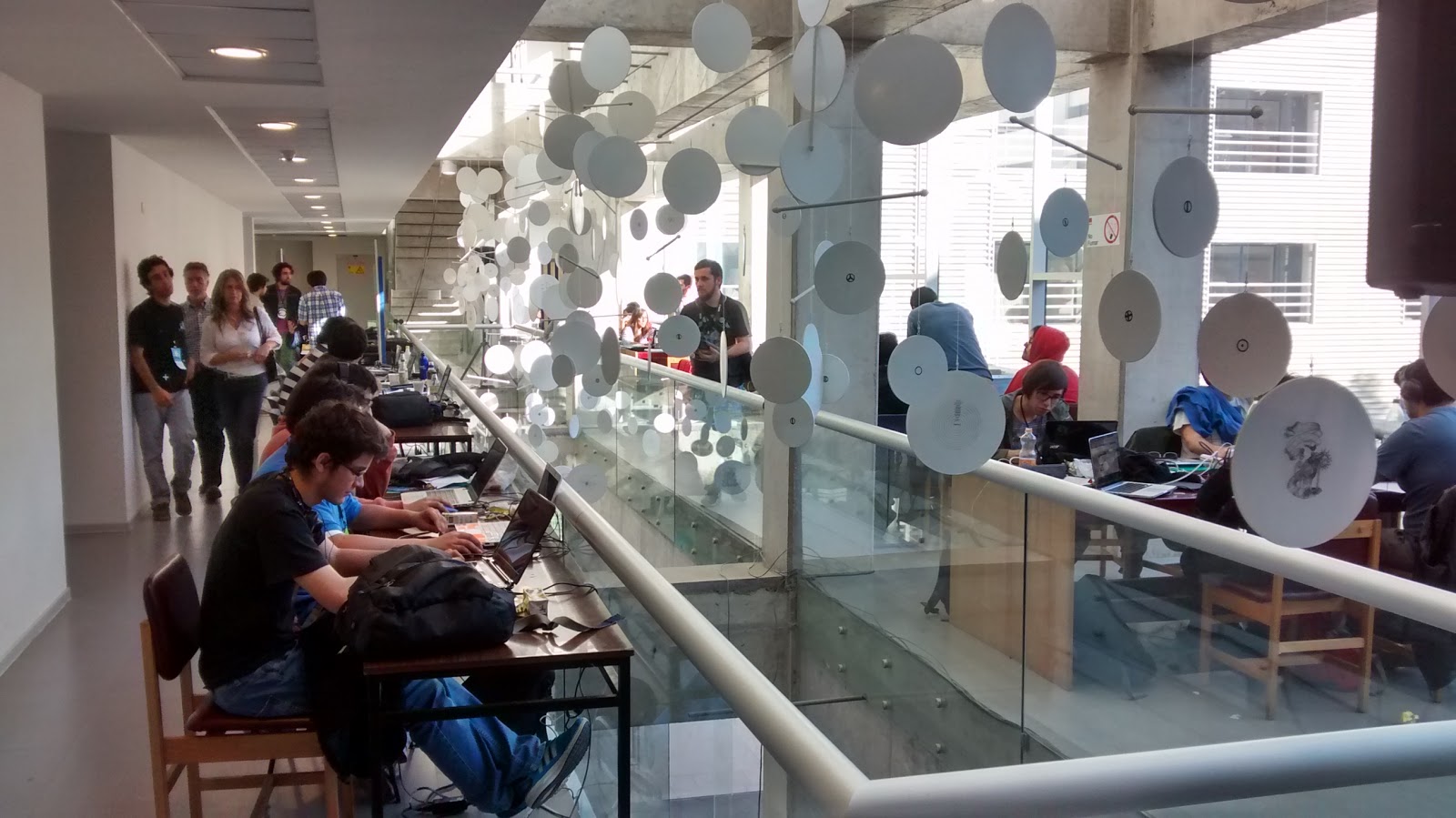 Participants working on their projects! 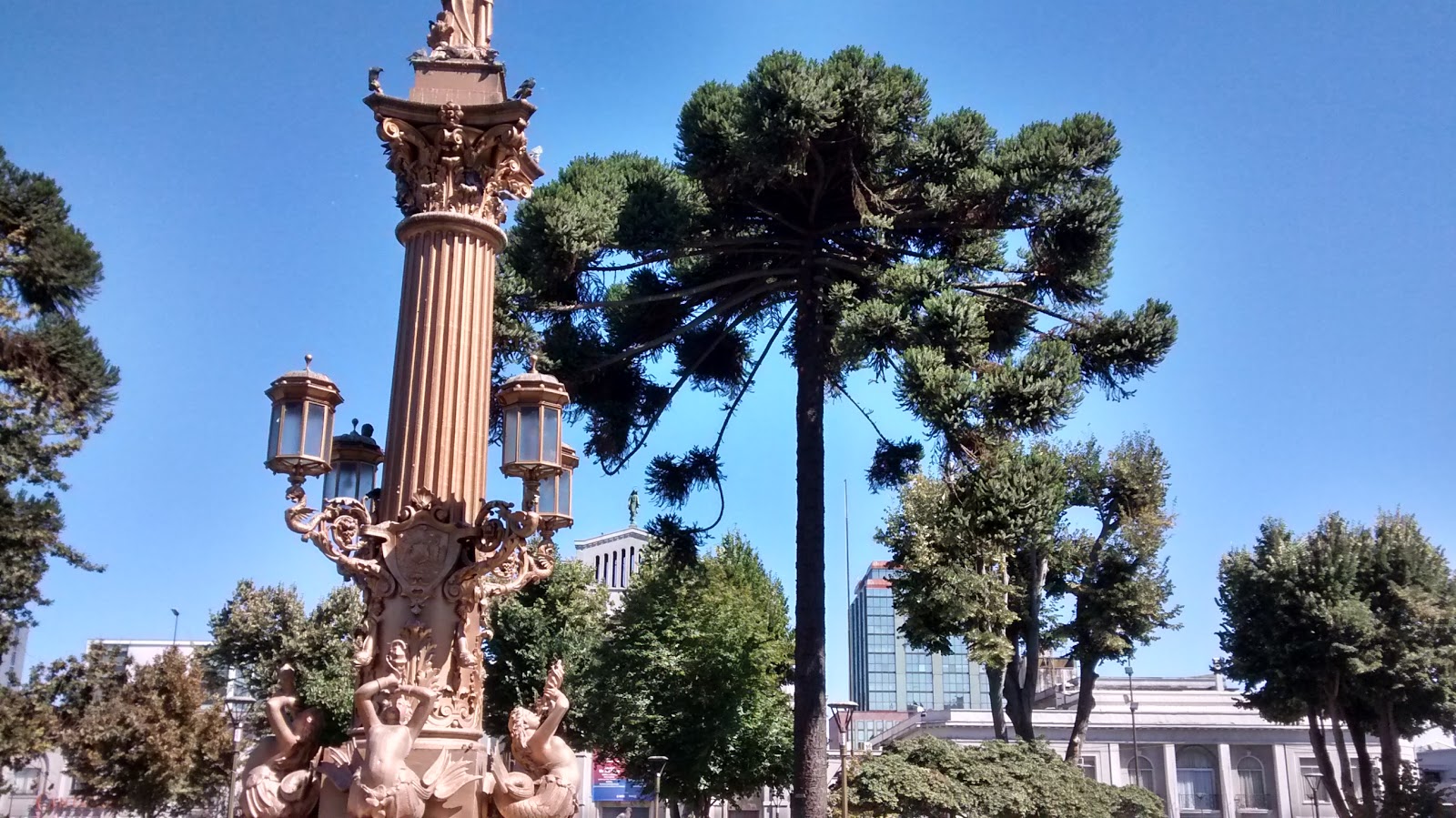 This is Plaza de Armas, the main square in Concepcion. Those weird pine trees are all over the place in southern Chile. I like them. 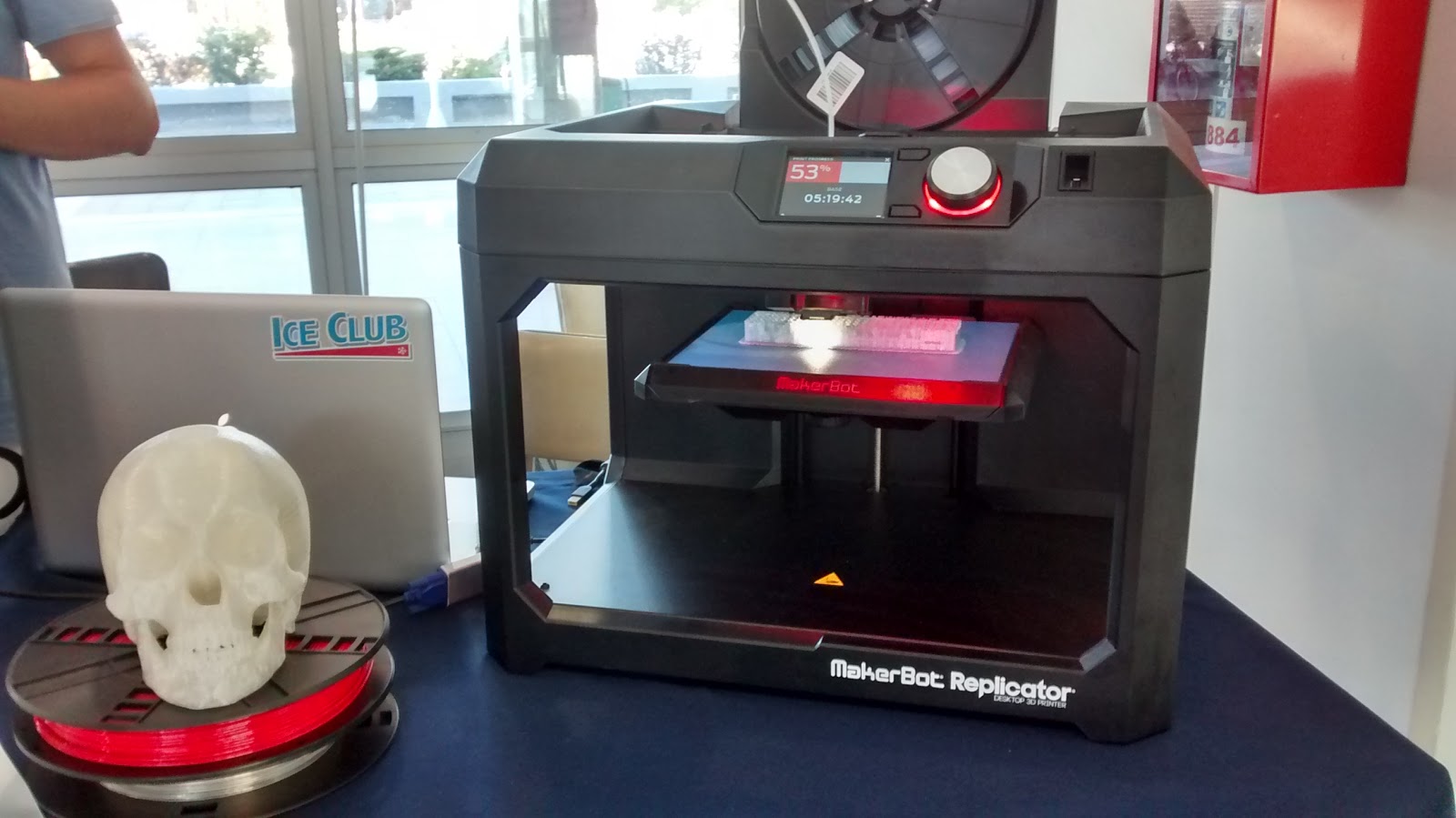 As previously mentioned, one of the sponsors of the event is a 3D printing company. They brought some samples. You can see the trophy pictured above being printed. 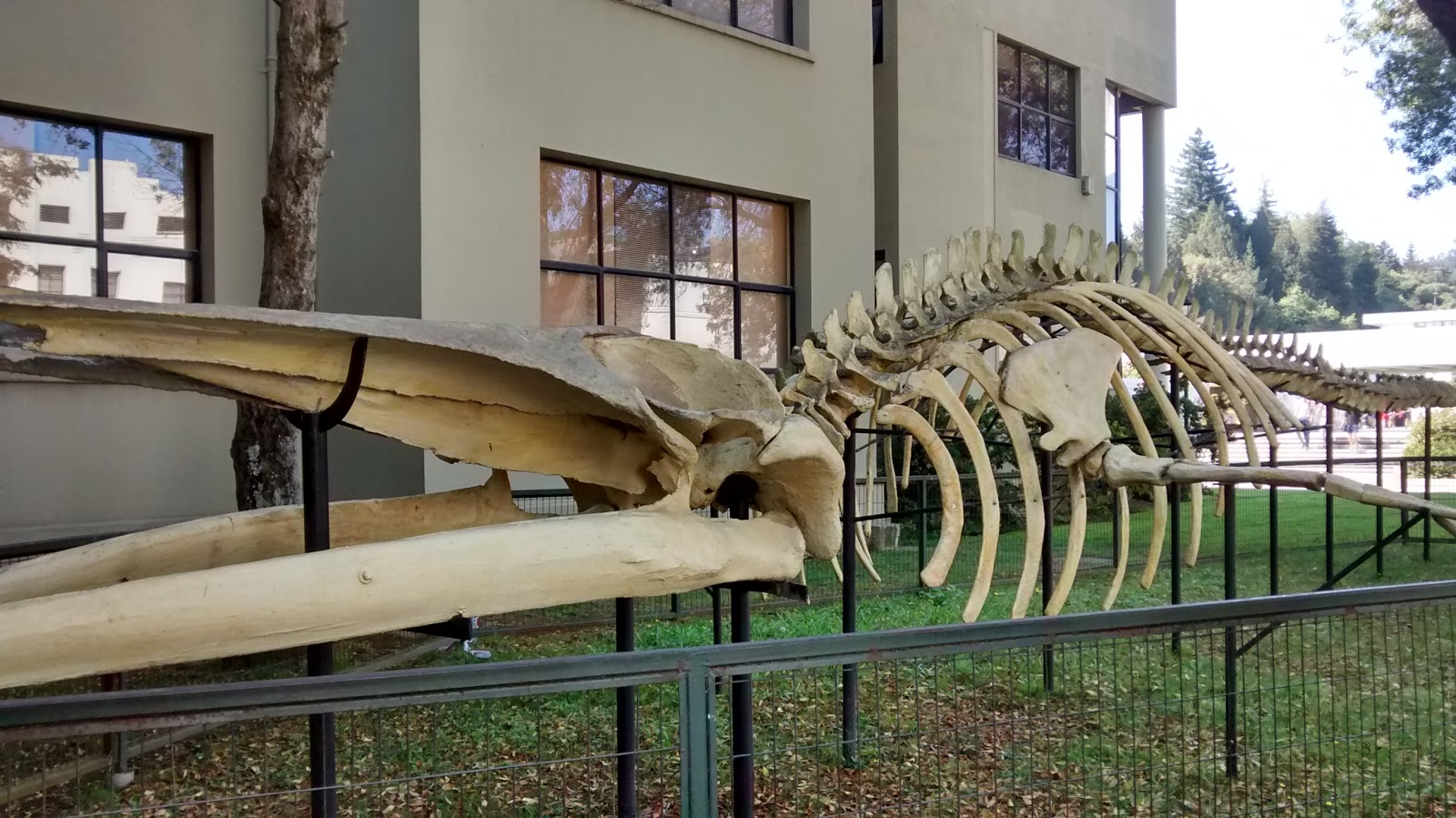 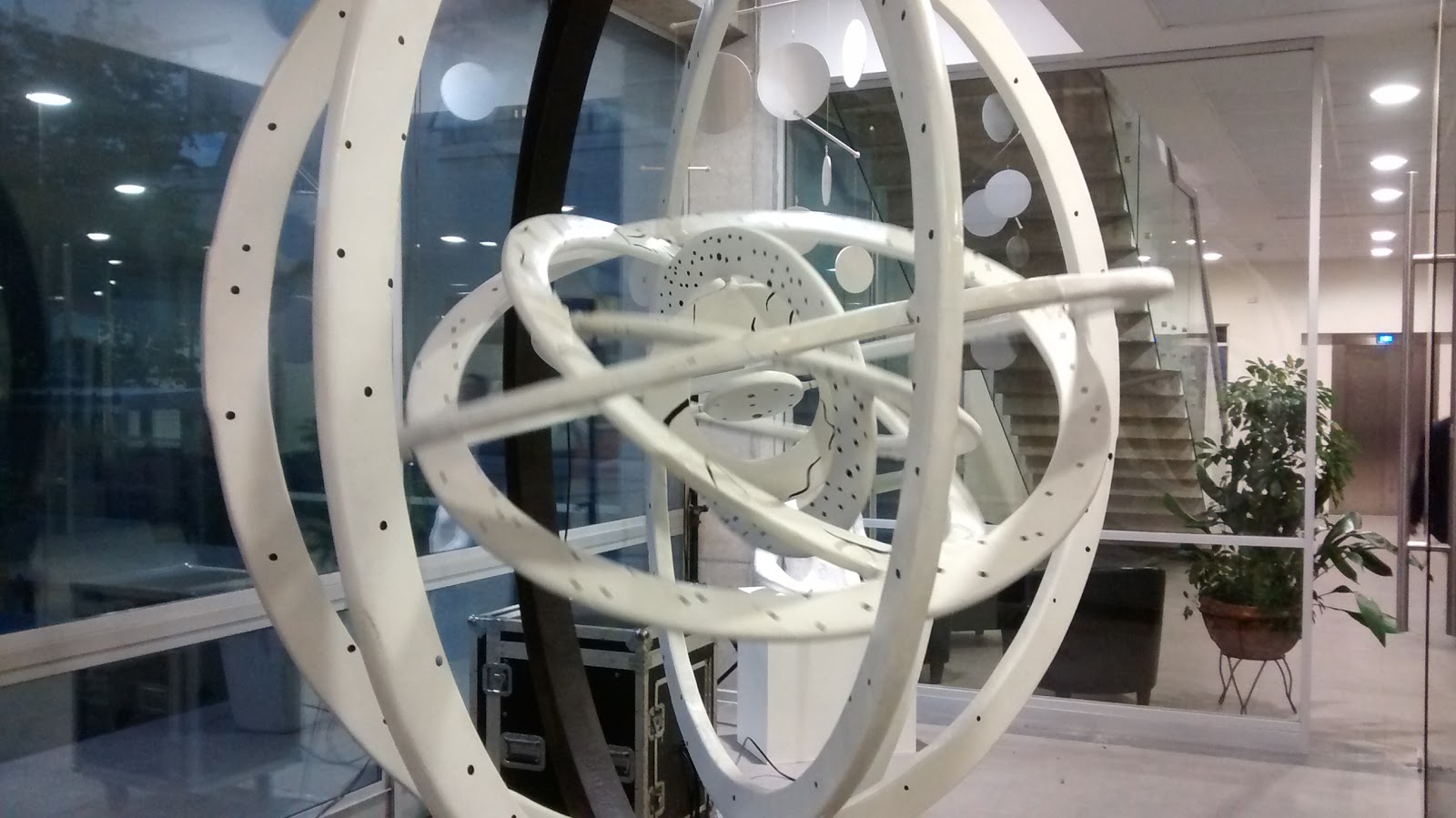 This piece was in the entrance to the chemistry building. The circles actually moved, it was pretty neat. 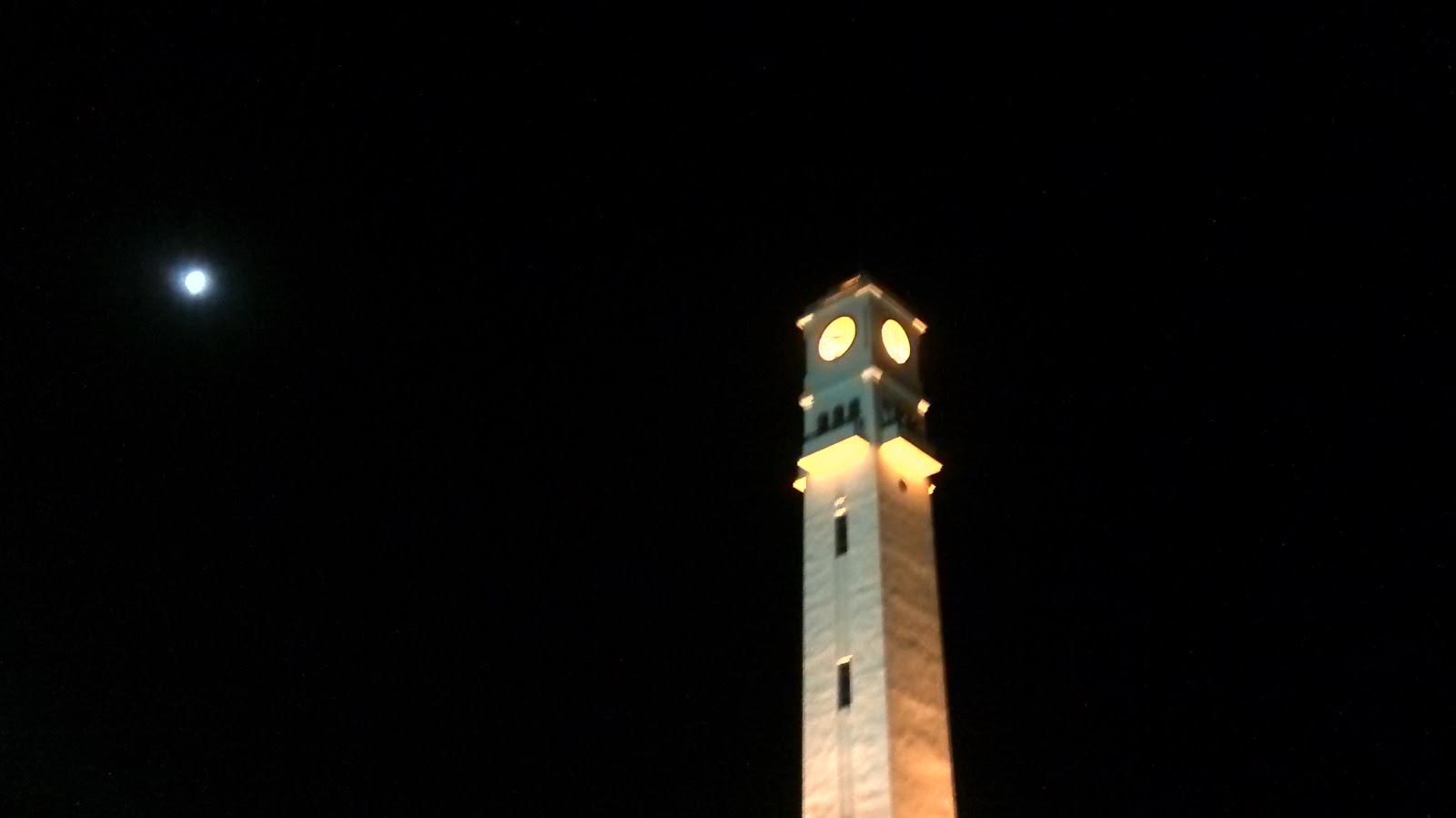 The clock tower at UdeC at night with the moon in the background. 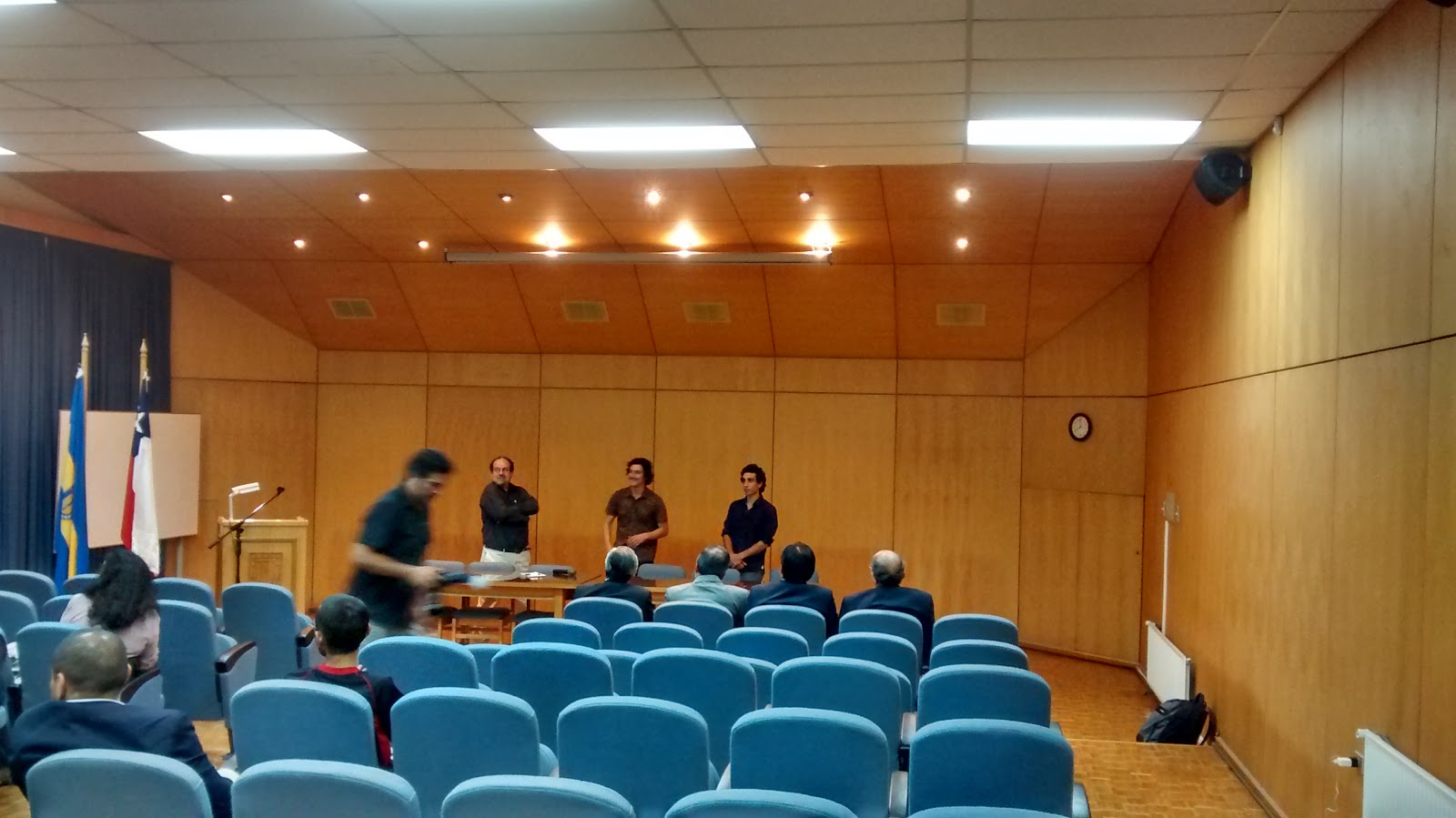 And finally, the hackathon organizers, Pablo and Diego welcoming the volunteers and event staff.
Posted by Unknown at 00:00